The data collection via "Create" has already been explained in detail. This is now to be deepened and the WissKI-specific peculiarities to be presented. For this purpose, the previously entered entity "ER 16197" of the "Document" concept is used again. 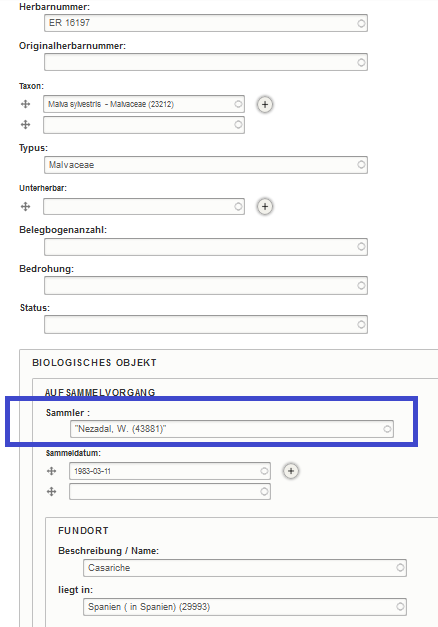 A special feature of WissKI is the automatic generation of links.  This means that when information is entered in specially created fields, a new instance of another group is created (as previously seen under "Navigate" in 2.1). This can be seen, for example, in the "Collector" field within the document entry screen.
The person who collected the plant (plant + preparation process → document) must be entered in this field. In this system, persons form their own group, which is entered using their own mask. If you want to specify a specific person as a collector in the input mask for the document and this person has already been created in the system, the system proposes the person concerned after entering a few characters in the "Collector" field. If the person is not yet known in the system, a new instance is created in the group of persons with the name entered by entering the name in the "Collector" field after saving the data record. This is done without the person having to be explicitly created in a person mask. To complete the personal data, the instance created must be called up separately. Only the name of the person was created using the method described above. 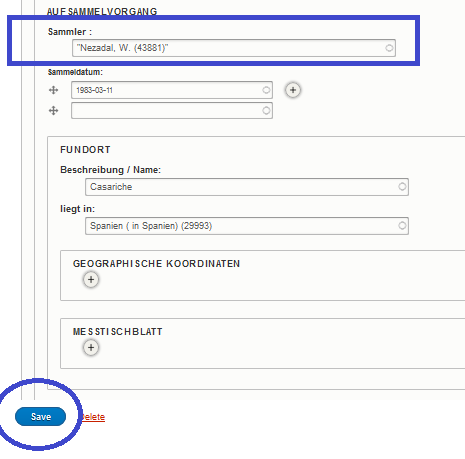 Separate masks for entering different categories - e.g. a separate mask for receipts and a mask for persons - can be used to encapsulate data. Similar to Wikipedia, you can link from entity to entity and from concept to concept.