"Ontology (Greek ὄν, on, "being", as present participle to εἶναι, einai, "to be", and λόγος, logos, "teaching, word") is a discipline of theoretical philosophy. Ontology deals with the division of being and the basic structures of reality and possibility. [...] A systematics of basic types of entities (concrete and abstract objects, properties, facts, events, processes) and their structural relations is discussed. [...] Since the 1990s, formal systems of representation in computer science have been referred to as "ontologies", a reference to the philosophical term. (Source: https://de.wikipedia.org/wiki/Ontologie)

"Ontologies in computer science are mostly linguistic and formally ordered representations of a set of concepts and the relationships between them in a particular field. They are used to exchange "knowledge" in digital and formal form between application programs and services. Knowledge includes both general knowledge and knowledge about very specific topics and processes.
Ontologies contain rules of inference and integrity, i.e. rules for drawing conclusions and ensuring their validity. Ontologies have experienced an upswing in recent years with the idea of the semantic web and are thus part of the representation of knowledge in the field of artificial intelligence. In contrast to a taxonomy, which forms only a hierarchical subdivision, an ontology represents a network of information with logical relations". (Source: https://de.wikipedia.org/wiki/Ontologie_(Informatik))

Examples:
The pizza ontology of the University of Manchester, used for the tutorials on Protégé - an editor for displaying, creating and modifying ontologies.
→ http://owl.cs.manchester.ac.uk/publications/talks-and-tutorials/protg-owl-tutorial/
The pizza domain is modelled here: A pizza consists of a dough base and one or more toppings. Such conditions can be represented with three-part statements - by means of the so-called triple structure. A triple is like a short sentence describing a fact. One also calls the three parts of a triple subject, predicate and object, but one can also imagine them as an identifier of the thing to be described (resource identifier), a property name as well as a value of this property (property value):

In the Protégé editor, you can display the entities or classes of ontology under the OWL Classes tab. The relations or properties are called properties in Protégé, they are therefore located under the tab of the same name.
The classes of the pizza ontology are hierarchically structured and are represented in Protégé as follows:
There are the two superclasses DomainConcept and ValuePartition, to which all other classes are subordinated and from which all other classes inherit their properties. While ValuePartition contains only one subclass - Spiciness - which includes the sharpness levels Hot, Medium and Mild, the superclass DomainConcept is divided into the subclasses Country and Food. The Food class can be divided into the subclasses IceCream, Pizza, PizzaBase and PizzaTopping. The class Pizza comprises as subclasses all possible types of pizza, such as CheeseyPizza or VegetarianPizza, and is more precisely defined by the properties hasTopping, hasBase, hasIngredient and isIngredientOf. At the pizza class level, for example, statements such as "Pizza hasTopping PizzaTopping" can be made. Since the pizza class is a superclass of CheeseyPizza, for example, CheeseyPizza inherits all properties of pizza, i.e. you can also use these properties to make statements about the CheeseyPizza class, such as "CheeseyPizza hasTopping CheeseTopping". 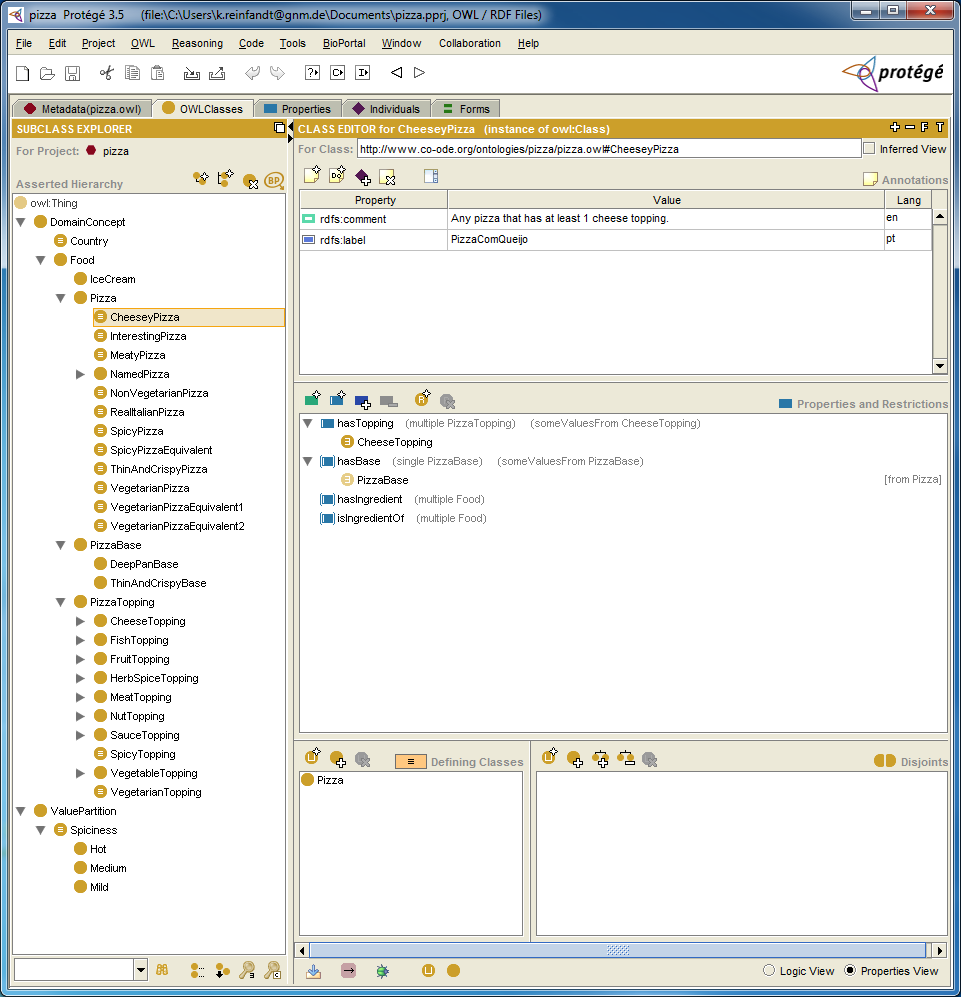