The special feature of WissKI as a graph database is the semantic data development, which is made possible by a meaning network, which lies behind the data entry fields. This network consists of many paths, which can be built and configured in the so called Pathbuilder (Configuration → Pathbuilder). 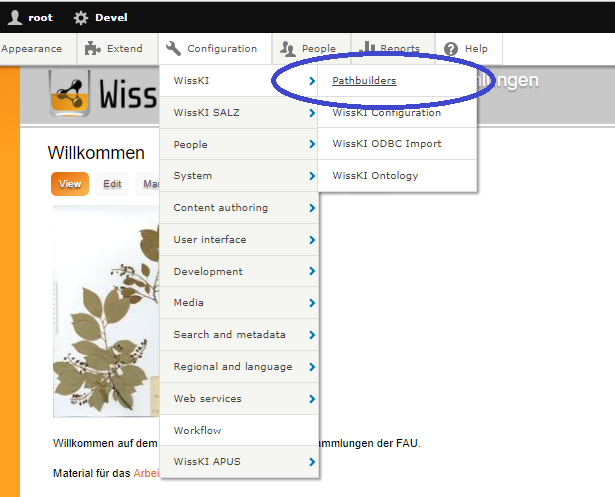 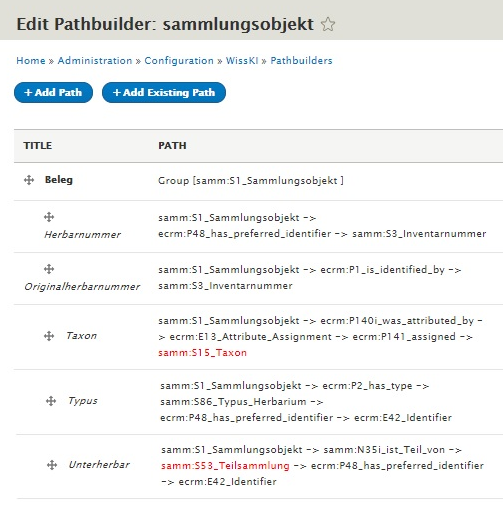 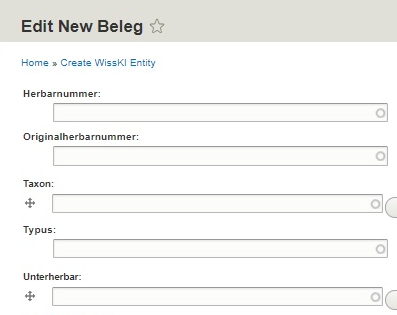 When you look into the Pathbuilder view, you can see that the top point "Document" is completely indented to the left. This hierarchical representation, which represents the actual network in 2D, is also reflected in the view of the fields or input masks. The indentation for "Document" to the far left shows that it is at the top of the hierarchy and is therefore a separate instance or category. The following paths are subordinate to this.
The first column "TITLE" shows the individual titles of the paths that correspond to the titles of the fields in the input mask. In the second column, which is titled "PATH", the semantic path can be recognized. If a value is entered into a field in the mask and saved, this value is saved together with the underlying semantic path, which expresses the meaning of the value. Thus the entered value, which in itself only represents a character string, is assigned an additional meaning. This ensures that the entered value remains interpretable.
For example, the path for the herbarium number says that there is a collection object that has a preferred identifier. This identifier has a value. This value is entered in the field.
So the semantics of the path defines exactly what kind of values can be entered in this field.
The parts of the paths consist of two different categories that originate from the ontology of CIDOC CRM: Entities and Properties.
Entities are all kinds of things and concepts that humans know. These can be physical (e.g. objects) or immaterial (e.g. concepts). The CIDOC CRM is to be understood as a kind of construction kit. It contains, for example, places, actors, things created by man, time periods, etc. In addition, there are events through which e.g. place, actor, thing and time can be connected, more about this later. For this reason, CIDOC CRM is also regarded as an event-centered ontology.
Before the construction of the paths can be started, it should first be introduced what an ontology is and what it serves for.